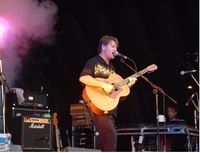 2002 Memories of Nick Harper 'The Magic Trick' (by Alan Thompson)

Later on in the day I spotted Nick backstage, looking refreshed and energetic. I went over for a chat, and during the conversation mentioned how much I liked the new tune he'd written for his daughter (which I'd heard for the first time in Chester in May). I was delighted that he chose to play it in the set later. I also mentioned the fact that the Muffin Men (a Zappa tribute band) were on the same bill as him, and wondered about the chances of getting two different versions of Titties And Beer in the same festival, and how amusing that would be! Later, during Nick's set, he mentioned that he'd had a word with the band and since they don't do that song, he was going to! When Nick came on, it seemed apparent that quite a few folks were there just for him, though that still left a large number who had probably never heard of him before. He started out a bit wobbly, I thought, and it took until the third song to see him relax a little and start turning on the old Harper magic. He tended to keep to the upbeat lively stuff, which was more suited to that type of gig - outdoor festival where most of the audience probably hadn't even heard of Roy Harper, nevermind Nick. The applause he was getting after each song was immense, and genuine. A true indication of the guy's total ability to get a crowd hooked. Anyway, here's the setlist: She Rules My World / Karmageddon / Building Our Own Temple medley / Radio Silence teaser (aborted) / She Makes Music (Lily's song... or is it called Just By Being Near?) / Guitar Man (with Whole Lotta Love Zep thing) / Galaxy Song / Love Is Music intro > Headless / Titties And Beer

Nick stayed with us all evening and had a great time, he's such a funny and intelligent guy. A highlight for me was when we (some of the crew and Nick too) were just taking some time to chill out later in the evening, in the festival HQ, away from the crowds and the music for a while. One of the festival organiser's daughters, Gemma Rogers, came in to say hello (she was only 8). Nick grabbed her attention by showing her a magic trick involving a length of string tied in a knot like a cats cradle. Asking her to stick her thumb up to him, he looped the string over and then held the other end in his right hand. He then made a few twists and turns ending up with his left middle finger in contact with her thumb. "Are you ready?" he said, and pulled with his right hand. Amazingly the tangled loops unravelled and snaked around Gemma's finger, coming free as if by magic! She was wowed to say the least!

He then went on to teach her the trick, which was lovely because she was very nervous about trying it out on some of us grown ups. Patiently, step by step, he explained how to do it and after a few quick attempts she'd cracked it. You should have seen the smile on her face! She was the proudest little girl on the planet, and kept repeating the trick on all of us in turn! Nick later told me that that had been the highlight of his week, and that he'd remember it for sure.

I'd thanked Nick personally, earlier in the day (before he played) for supporting our little event - it meant a LOT to us that he was playing. He was delighted to be there it and said he would be up for it again, anytime. Incidentally, i also heard Nick chatting to a couple of the guys from the Levellers, who were playing the festival as their "Drunk in Public" line up. They seemed to be discussing getting together on something in the future...